What do you get when you take four successful, good friends and mix it with a huge passion for antiques? A new junkin show of course! Today, we are so excited to share the interview we did with Georgia Junkies 41. There has been no shortage of shout outs over on our Facebook page for this upcoming vintage market.

You may be wondering why we have shown so much love for this show over the thousands of other all across the land. One reason is three of these ladies are dear friends of mine and that’s just what friends do. The other reason is we were asked to be the featured vendor and of course, we are thrilled and honored to do so. I love these gals. The three of us had booths (they still do) at the Marietta Queen of Hearts, while Stephanie, Kathy and I simultaneously had second booths at another location in Hiram. So these old gals are my partners in crime or should I say…Sisters in Junkin.

Dr. Shara Mays also happens to be my Optometrist and is part owner of True Vision Eyecare in Acworth, GA. I did a blog post about them back in August 2016. If you missed it you can read it here. Shara has been in this industry for a long time and has had many home decor booths over the years. You can find her at The Market and at Queen of Hearts Antiques and Interiors.

Stephanie Rainey is a former teacher and assistant principal who is now a virtual assistant for Shaun Bradley with Vistage Worldwide. Kathy Albright works with ABS which is a company that sells shutters and blinds. These two ladies joined forces and created Scrappy Chix. They have a booth right down from Shara’s booth at Queen of Hearts. You can also find them at Two Liru in Downtown Historic Acworth, GA.

Shana Gould whom I have not had the pleasure of meeting yet has owned and sold several different businesses. Most recently she was the mastermind behind Divas and Dames and Choxies Craft and Crate both in Acworth. She just launched an online boutique called Blonde Junkie. She also has space at  Two Liru.

Now here is where the funny part comes in…Shana had her new boutique branding done by the uber talented Kelli Mitchell over at Pink Lemonade Company. I,too, have been a long time fan of Kelly’s work. I created a social media graphic for the show using some of her designs. I was going to do their show brochure but time just wasn’t on my side. I had to suggest they get someone else. That, someone, was Kelly and that’s when I was told Shana already had employed her design services. Such a small world. Here is the cute graphic I did for them. 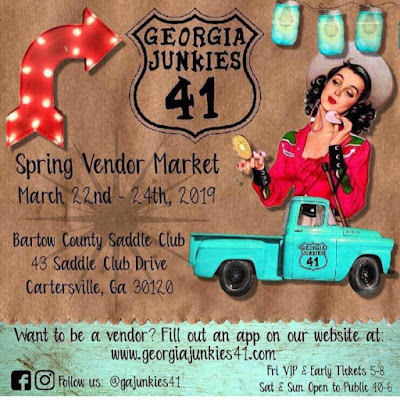 So without further ado let’s get this interview started. But first let’s put some faces with the names.
from left to right Shara Mays, Stephanie Rainey, Kathy Albright, Shana Gould 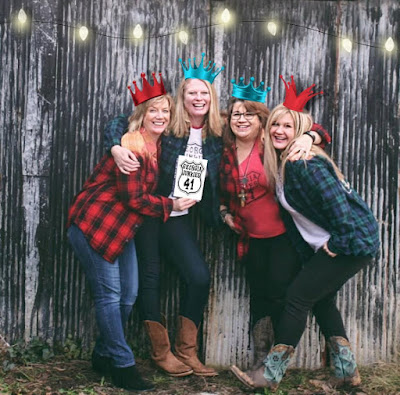 BC: How did the idea for Georgia Junkies come about?
GJ41: A couple of us have been in business and renting booths at local antique and interiors stores for years. Two of began talking a couple of years ago about how nice it would be to have something like Round Top, Texas right here in North Georgia, but neither of us had ever started a business. So we contacted one of the other partners who has started several businesses to see if this was something that she might be interested in doing with us. At the time we all had very busy lives and we felt we were not in a position to start something new that could potentially grow to be something pretty big. So we put things on hold for one year. When we met again at the same Starbucks one year later, we decided it was a good time for the four of us and we had each put time and thought into what we envisioned this event to look like. The next week we found ourselves in Shana’s jeep driving all over North Georgia looking for a perfect location. When we drove into Bartow County Saddle Club we knew instantly that this year-long dream was about to become a reality.

BC: How long have you been planning this event?
GJ41: We talked for one year and have now spent a second year planning. Our first vintage market is next weekend. March 22-24th. It’s hard to believe that two years of dreaming and working is now a week away from reality.

BC: Creating a vintage market like this seems like a lot of work. To give an idea to anyone else out there thinking about starting one can you tell us how many hours went into all the planning?
GJ41: We met every week for over a year and we were constantly talking or texting. We each split duties such as advertising, website, vendor relations, etc. We would say at least ten hours a week each week for the first six months and since September, it has steadily increased to twenty to thirty hours. It has become a full-time job for all in addition to our already full-time jobs. But it has been very rewarding.

BC: What are some things you hope to provide the attendees?
GJ41: We want this vintage market to be a really fun experience. We knew we wanted to provide the ultimate shopping weekend, but more than that we wanted to create an event that every member of the family would enjoy and remember. We have over one hundred vendors and we have been careful to accept entries based on the interests of everyone who will walk through our gate. There will be a fashion show, live music, product demonstrations on stage by our vendors, great food and a corn hole area for anyone waiting on shoppers. While shopping has always been our main focus for this event, we wanted to create a family-friendly feel.

BC: After the announcement of this show, your vendor list filled up so quickly. How did you accomplish this?
GJ41: Great advertising has been our number one goal for this event. We have worked really hard for outstanding and now for excited customers. We have used all types of social media, particularly Facebook. It’s amazing how far social media can reach. We had a customer contact us from Adairsville who heard of us from a friend in Arizona.

To get the best possible vendors we went out to all the local markets that are similar to the one we are building here and recruited top talent at each one. We had cards printed up with all of our information and personally invited vendors that we really wanted in our market. We also have a website and through that and our social media presence, many vendors found us as well. Now we are focusing on the event advertisement. We have done everything from news articles to a billboard in Cartersville to rack cards and to a radio interview that will air Tuesday morning at 7:30 WBHF am 1450 in Cartersville. 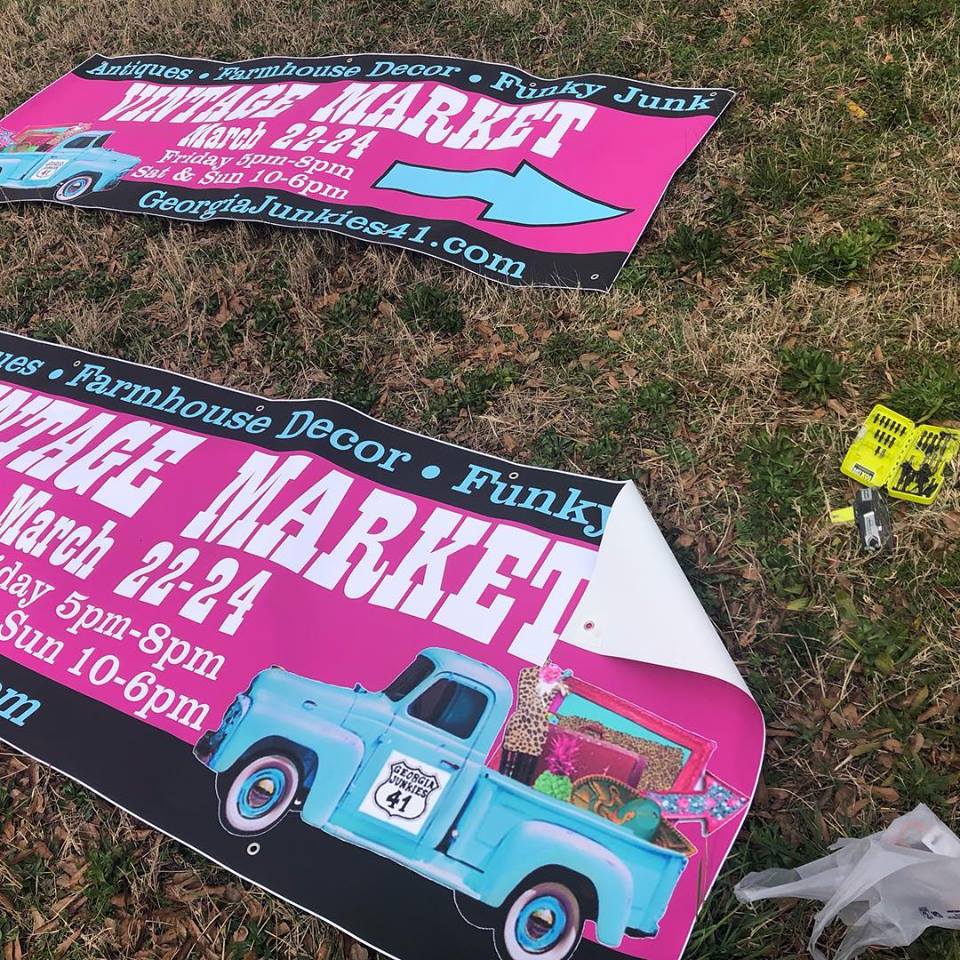 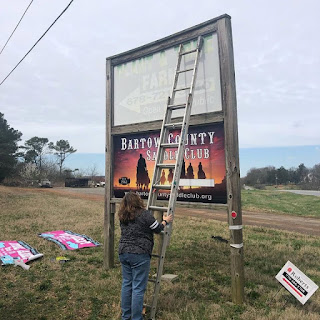 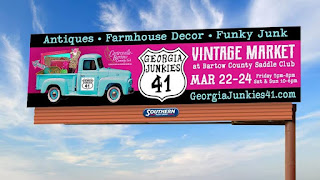 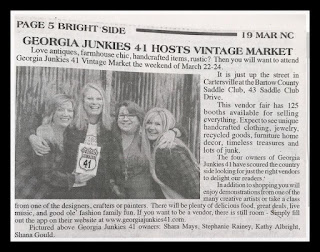 BC: You mentioned a fashion show and product demonstrations. Can you please give us the deets?
GJ41: Yes here is the info and schedule. 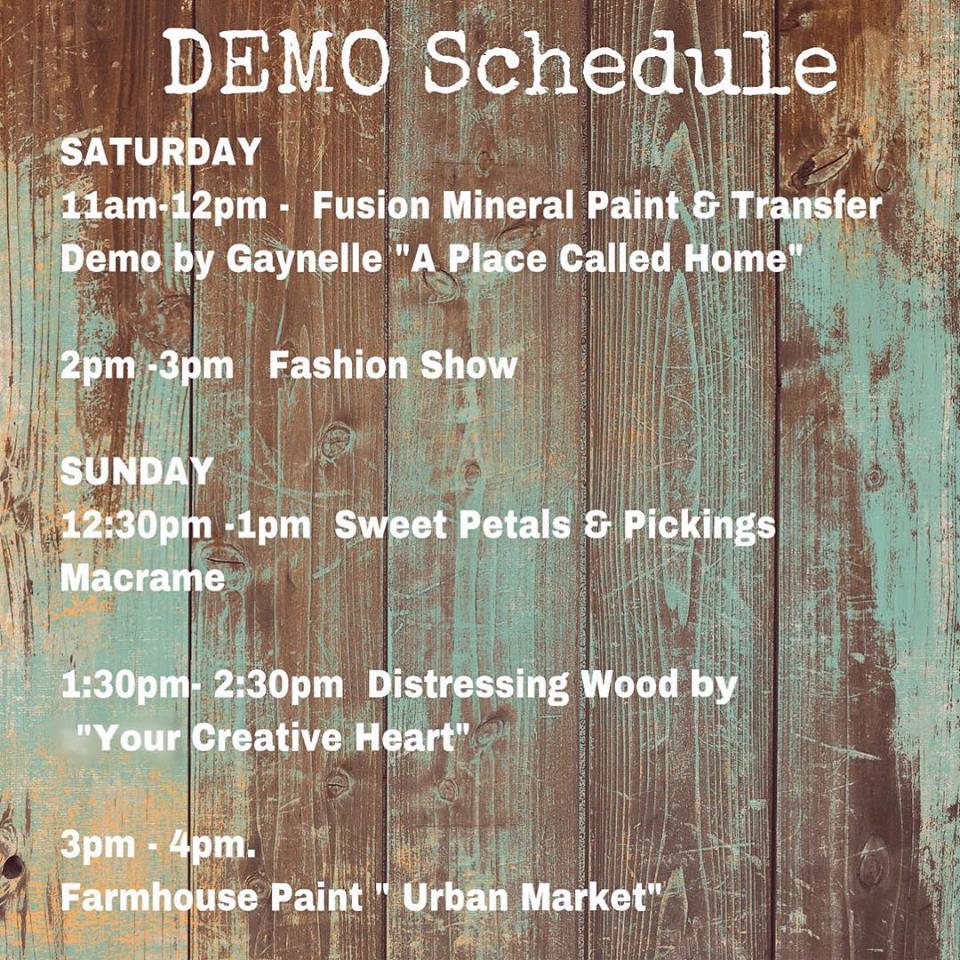 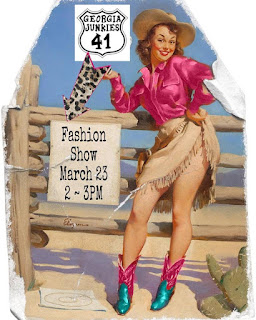 BC: Is this a rain or shine event?
GJ41: Yes it is. There is a covered area

BC: How often will you ladies do these shows?
GJ41: The vintage market will be a semi-annual show. We will have one in the Spring and one in the Fall.

BC: Do you have a date for your Fall show? I’m sure vendors are already asking you about this hint hint!
GJ41: Yes, our next show will be on October 18th-20th.

BC: Are you accepting applications for the Fall market?
GJ41: We will take a couple of weeks off after the first market. Then we will start right back up in the middle of April with a recap meeting. Vendors can find the application on the website by the end of April. Fall is a very busy show so we would suggest vendors not wait too long to apply. We were sad to turn away some top notch vendors for the first show because we had already met our quota for specific categories. We are trying very hard not to duplicate booths, although that is tough at times.

When we reached a certain number for jewelry, soap, etc we said all others who applied after that were denied during the application process. We made a commitment to our vendors that we would try to control as much duplication as possible. We have been true to our word.

BC: What piece of advice would give others thinking about starting a vintage show like this?
GJ41: Our advice to anyone wanting to put any type of event together, not just a vintage market but anything large scale would be to not rush the process. We took almost two years from the first conversation to the first show. It took a good majority of that to decide what our big vision was and to get every little detail hammered out. There are a lot of decisions, paperwork and details that no one thinks about when they are walking through a show. For instance, there is a specific type of fire extinguisher that must be on the premises throughout the event. And that’s not the one we all have under our sink in case of emergencies. That is just one example, but there are many more details that we have learned this past year about creating an event that had we rushed it and not taken time to learn , we could potentially have had a disaster on our hands.

BC: Ladies thank you so much for doing this interview with us. Dawn and I are so proud of you ladies. We know this is going to be a huge success. In closing is there anything else you would like to say or add?
GJ41: Here is some additional info for anyone wanting to attend. 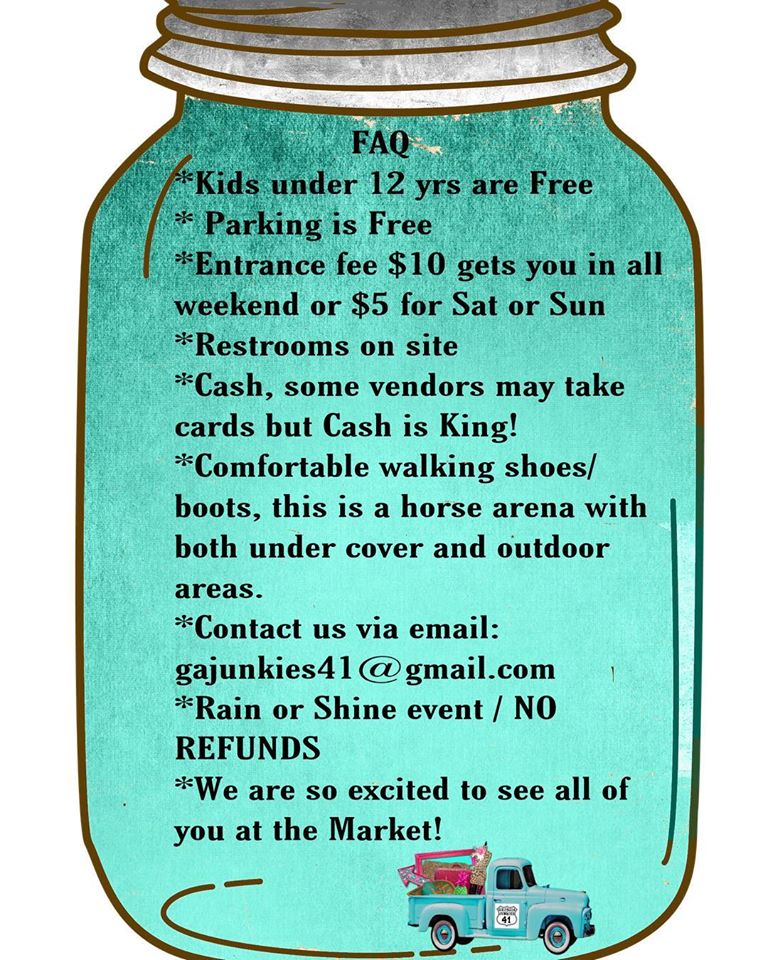 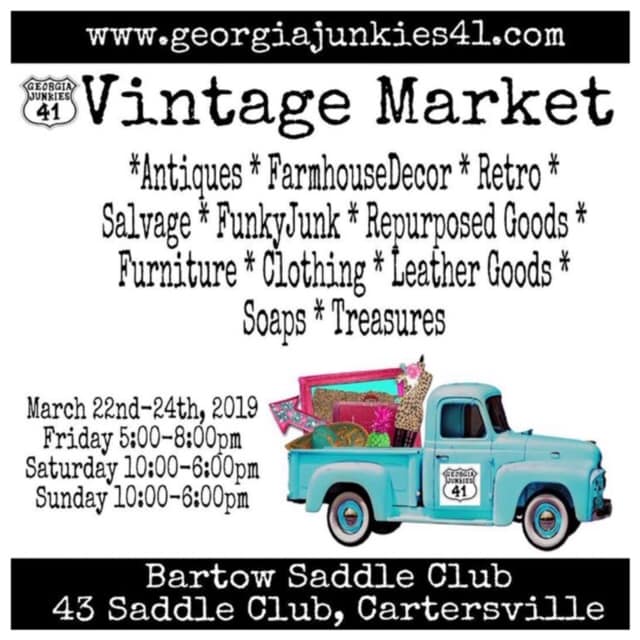 Special Guests Petticoats on the…

I love this shot that Rebecca shared earlier on he

I need my JUNKIN fix today!!